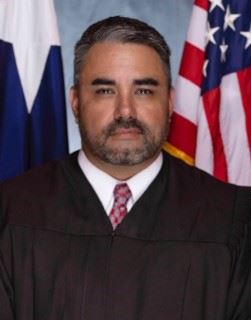 It is the mission of the 86th District Court to apply the law consistently and impartially, to use discretion wisely and compassionately, and to earn the respect and confidence of the public by treating individuals with fairness, equality and respect. We will strive to meet this objective expeditiously and at the least expense practicable to the litigants, their attorneys, the state, the county, and the court.

Judge Blair is a graduate from Mesquite High School. He earned his  B.A. from Southern Methodist University in 2000. Then, in 2006, he completed an M.B.A. and a J.D. from Texas Tech University.

After graduating from law school, Blair began his legal career as an assistant district attorney in the Dallas County District Attorneys Office. He worked in that capacity for four years, eventually leaving to become a partner in a private firm. While in private practice, he specialized in divorce, child custody, criminal defense, and civil litigation.

Judge Blair was elected Judge of the 86th District Court of Kaufman County in November of 2014 and was sworn in on January 1, 2015. He is the local administrative Judge for Kaufman County.

Blair is married to Kim Blair and the proud father of three children.

If you are representing yourself and  need help with legal forms you can go to the Texas Law Help website.

If you need a child support calculator you can go to the Attorney General of Texas website.

If you need to apply for a court appointed attorney on a criminal matter go to the  Indigent Defense Court Program website.

Do not attempt to contact a judge - by mail, e-mail, phone, or in person - about any pending or potential lawsuit! Doing so may result in serious consequences.